The Gambia is one of the smallest countries in the world and represents a microcosm of the problems that still plague emergent nations. Gambia is poor in identified mineral wealth and has no industry or commerce of note. There are high taxes on new imports so a practical help is to take in second hand vehicles that can be purchased at reasonable prices. One such effort is the Plymouth to Banjul Motor Rally where second hand cars are driven down the coast of west Africa and then auctioned in Gambia along with much of the camping euipment used in the venture to locals. The proceeds of the auction go to Gambia charities that support education and skills development for young people. The event also brings in additional tourist revenue from the rally teams who normally stay several days or a week before returning home.

THE PLYMOUTH TO BANJUL MOTOR RALLY 2005 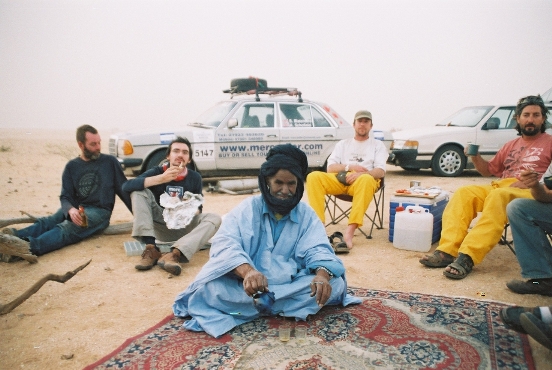 The Plymouth to Banjul Challenge involves some one hundred and fifty left hand drive cars in three despatch groups being driven to Banjul in Gambia.

4,268 miles of eventful but trouble free motoring. The Renault 4 GTL driven by Ben & Richard Llewellyn raised the equivalent of £1,600.00 (78,500.00 Delacis) and was one of three cars purchased by the local church. These three vehicles have already been paid for, dedicated drivers provided and assigned to transporting nurses and teachers to the smaller villages. "Practical support in action". Additional monies were also raised from the sale of tent, sleeping bags, cooking equipment and tools.

Each car has a team of two. This is to keep weight down and give scope for recovery of other team members along the way if necessary.

Richard and his second son Benjamin drove a 1986 Renault 4 in the first despatch leaving the U.K. on the 17th of December under the team name of "Charlie Brown" (the car looks like Snoopy and is named "Spike" after his uncle who lived in the desert).

Benchmark and Ben's Tree Surgery business sponsored the team paying all the costs of the enterprise including the airfares home.  They arrived in Banjul on the 5th of January 2005 at 08:25.